How to create an end of day scan form for USPS

A SCAN Form is an A4 document with a master barcode that the carrier can scan to accept all packages into transit in one go, without the need to scan packages individually. 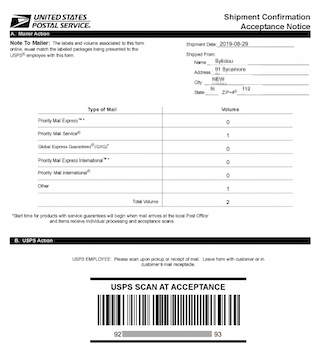 Manifests speed up the package acceptance process. Most carriers will not accept a large number of packages at their location or for a scheduled pickup without a manifest. USPS manifests are called SCAN Forms

When to create a SCAN Form

With USPS you need to create a manifest before 9pm local time on the same calendar day that the labels were generated.

If the non-manifested packages haven't been collected by USPS you may choose to delete the labels and then re-ship and print the new labels. These will then be included when you attempt to generate another manifest.

Creating more than one SCAN Form a day

You can create multiple SCAN Forms each day when needed.

If you were to create a large batch of labels in the morning and then immediately generate your SCAN form, all of those labels will be included on that manifest.

If you were to create another large batch of labels later in that same day, you still can, and should, create another SCAN Form. The second manifest will only include the new group of labels, not the labels that were already included on the manifest that morning.

Removing an item from a SCAN Form

Once a shipment has been included in a SCAN form you can not remove it. This is because USPS has already received the data for the label. If you don't want to include that label you can submit it to be refunded by Deleting the shipment in Veeqo.

As long as the label doesn't get used your account will be credited after 30 days.

How to Generate a Scan Form

To generate your scan form go to Settings>USPS Scan Forms.

You will see all your Locations in Veeqo. After you have generate your USPS shipping labels for the day hit + Create SCAN Form. Your SCAN form will open in a new tab once it has been generated by USPS. You should then print it out ready for the Postal Worker to scan on arrival.

Did this answer your question?